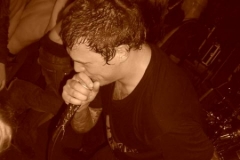 One of the most influential bands in the history of hard music, Sick Of It All, are celebrating their 20th year as a band. In honor of this mark in history Sick Of It All are releasing a tribute album entitled “Our Impact Will Be Felt” with many of today’s leading bands covering their favorite songs by the band. This album will be in stores on January 23, 2007 via Abacus Recordings.

As one of the longest standing bands still proudly waving the flag of New York Hardcore, Sick Of It All have made their mark as one of the cornerstones of hard music, proving that heart, hard work and dedication to hardcore is about more than just the music and an image, it’s a way of life. Since their inception in 1986; Sick Of It All have released 9 full length albums, toured the world countless times, have been hailed in such publications as Rolling Stone, The New York Times, Alternative Press, Penthouse, Revolver, Guitar World and more and can currently be seen on FUSE and MTV’s Headbangers Ball. Still exhibiting as much energy as the day they started, Sick Of It All are not slowing down in the least with their latest release “Death To Tyrants” soaring the charts and their energetic live show engaging thousands across the globe.

“Everything they do is an inspiration. They have been together during three different decades — not for the money, the glory, or the fame, but for the love and spirit of the music. There is no other band that has captured the true heart of hardcore like Sick Of It All.” – Brandan Schieppati – Bleeding Through

“(Sick Of It All) shaped the way I write songs which is still present to this day. It’s a complete honor to be a part of this tribute.” – Joe Principe (Rise Against)

Bane – “We Stand Alone”
Bleeding Through – “The Truth”
Bouncing Souls – “Good Lookin’ Out”
Hatebreed – “Shut Me Out”
Himsa – “Maladjusted”
Ignite – “Cease Fire”
Kill YA Idols – “Friends Like You”
Madball – “Give Respect”
Most Precious Blood – “Alone”
Napalm Death – “Who Sets The Rules”
Pennywise – “My Life”
Rise Against – “Built To Last”
Sepultura – “Scratch The Surface”
Stretch Armstrong – “Busted”
Suicide Machines – “Goatless”
Unearth – “It’s Clobberin Time”/”What’s Going On”
Walls Of Jericho – “Us Vs. Them”

This website uses cookies to improve your experience while you navigate through the website. Out of these cookies, the cookies that are categorized as necessary are stored on your browser as they are essential for the working of basic functionalities of the website. We also use third-party cookies that help us analyze and understand how you use this website. These cookies will be stored in your browser only with your consent. You also have the option to opt-out of these cookies. But opting out of some of these cookies may have an effect on your browsing experience.
Necessary Always Enabled
Necessary cookies are absolutely essential for the website to function properly. This category only includes cookies that ensures basic functionalities and security features of the website. These cookies do not store any personal information.
Non-necessary
Any cookies that may not be particularly necessary for the website to function and is used specifically to collect user personal data via analytics, ads, other embedded contents are termed as non-necessary cookies. It is mandatory to procure user consent prior to running these cookies on your website.
SAVE & ACCEPT
Loading Comments...