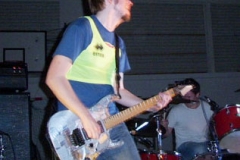 “If you haven’t already heard, we are pleased to the brim in announcing that Hydra Head Records is going to release a new Cave In album this summer. Tentatively scheduled for an August 2005 release, “Perfect Pitch Black” will be an 8 song disc that features tunes recorded between 2003 and 2004, with some recent embellishments from our sonic spice rack recorded in March 2005. So whatever recorded versions of these tunes you may already be familiar with via the internet, the actual disc that sees the light this summer will be news to your ears. Andrew Schneider is at the helm of both the engineering and the mixing, and further recording and mixing production for the project is set to wrap up by the end of April (at Schneider’s fancy new studio in Williamsburg, NY). We’ll keep you posted on further developments!”

This website uses cookies to improve your experience while you navigate through the website. Out of these cookies, the cookies that are categorized as necessary are stored on your browser as they are essential for the working of basic functionalities of the website. We also use third-party cookies that help us analyze and understand how you use this website. These cookies will be stored in your browser only with your consent. You also have the option to opt-out of these cookies. But opting out of some of these cookies may have an effect on your browsing experience.
Necessary Always Enabled
Necessary cookies are absolutely essential for the website to function properly. This category only includes cookies that ensures basic functionalities and security features of the website. These cookies do not store any personal information.
Non-necessary
Any cookies that may not be particularly necessary for the website to function and is used specifically to collect user personal data via analytics, ads, other embedded contents are termed as non-necessary cookies. It is mandatory to procure user consent prior to running these cookies on your website.
SAVE & ACCEPT
Loading Comments...